When Mortom first released, I was invited to do a guest post for Amazon about “Why small towns are creepy.” It was a lot of fun to write, and I hope you enjoy it! 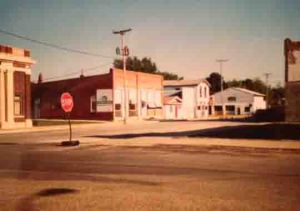 Most of us have experienced one at some point in our life: small town, U.S.A.

Maybe it was visiting relatives as a child (often kicking and screaming and followed by the inevitable: “Your grandparents aren’t going to be around forever, you know!”), or maybe it was an innocent wrong turn onto a dirt road, driving through endless miles of timber before stumbling into a secret corner of the world. If you were lucky, the town was beaming with friendly folks who were willing to give neighbors and strangers alike a helping hand. The smell of apple pie was in the air, and you could hear the crack of a baseball bat in the distance, followed by the sounds of cheering parents. You were the star of your own G-rated movie, and it was heavenly.

And then, of course, there’s the other type of small town.

You know what I’m talking about. Here, there are no manicured homes with lush, green lawns and landscaping . . . only dilapidated structures surrounded by yellowed grass choked with weeds. Where pergolas and garden gnomes have been replaced with rusting bicycles and fetid patio furniture. The downtown area is never more than a handful of businesses—half of which have been abandoned—and in the distance there’s always a lone dog barking, breaking apart the otherwise eerie quiet. This is the type of town where I spent my childhood summers.

And it was creepy as hell.

Don’t get me wrong: I love small towns. The creepier, the better. My wife and I often take weekend road trips, and we love discovering quirky towns—especially ones off the beaten path. Most places we find are populated by friendly and welcoming faces—which makes the wife happy—but I always leave feeling slightly disappointed at the normalcy. But every once in a while we discover a town where the streets are deserted, our cell phone can’t grab a signal, and we feel like we’re being watched by unseen eyes.

These are the towns that whisk me back to my childhood and awaken my imagination.

That dark alley nestled between the ice cream shop and library up ahead? Yeah, I’m fairly certain a zombie will lurch out at me if I walk past. Those flashing lights in the dark, night sky? I’m not sayin the residents of the town have been abducted by aliens (and replaced with exact duplicates), but can we really know for sure? And don’t even get me started on killer clowns hiding in sewers. Thanks so much for that phobia, Mr. King.

There’s a reason so many great horror stories and mysteries take place in small towns. Some of these places are barely a flyspeck on a map, and they’re often in the middle of nowhere. Most don’t have a local police force—only a county Sheriff—who probably lives three towns over in that place that smells of pie. But most importantly: everyone knows everyone, everyone watches everyone, and everyone knows everyone’s business. Small towns know how to deal in secrets. Sure, it might only be Maxine Wirt’s recipe for county-award winning pickles, or the fact that Craig Moore didn’t graduate high-school . . . but I’m always careful not to eavesdrop on any café conversations, or take any of the townsfolk out for a beer. If there are bodies buried in the basement of the courthouse, I don’t want to know about it.

So the next time you find yourself in a creepy small town, take extra care to be friendly and attentive, because you never know who might be listening or watching. And whenever possible, always check behind the ears of the locals, just to be sure they’re not wearing masks of human skin.

I know I always do.